Hundreds of festivals are celebrated around the globe some of them are religion based and others are geographic. You might have seen people celebrating festivals like Mud Festival, Baby Jumping Fiesta, Buso festival and others. These festivals grab attention because of their uniqueness or weirdness, you name it. One of such festivals in China has caught the attention of media which is specially arranged for a well-dressed dog. Yes, you read it right! 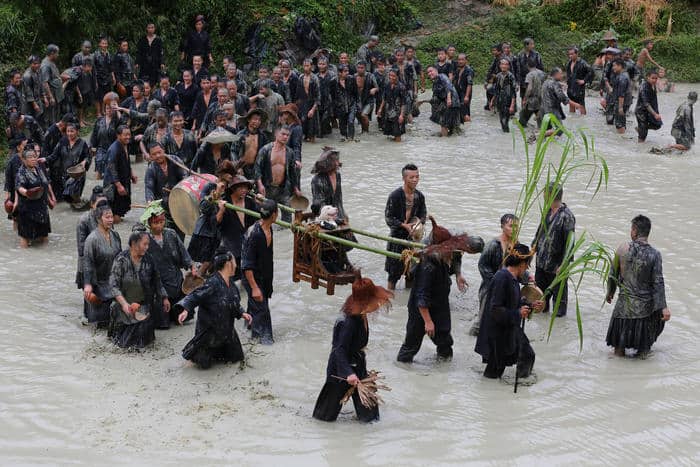 People in a village in China worship dog as god and celebrate a special festival every year to pay tribute to the dog. In this annual festival, a dog can be seen all dressed up in human clothes, being carried over a sedan chair and worshipped as the god in a village of Chine.

Legends of Jiaobang village in the Guizhou province of China has it as their forefathers were saved from thirst by a dog in the area and that brought them a major source of water there. The Miao people consider this act as a huge sign of divinity, peace, and prosperity and celebrate The Dog Carrying Day festival every year to pay tribute to this creature that is being worshipped for centuries there.

The whole celebration is carried out in a royal way in the form of a parade led by a shaman. The dog, dressed in the shirt and a hat, is carried on a wooden sedan chair and people sing and beat the drums to show their affection. People also throw mud at them as a sign of peace, prosperity, and health.

The festival, however, has received huge criticism online. Some people pointed out the chain tied around the dog’s neck while other linked this festival to the Yulin Dog Meat Festival where thousands of dogs are slaughtered every year.