Viral claims regarding the purported dangers of common household plants belonging to the genus Dieffenbachia (shown above) have been on the internet for years. One article (titled, colorfully, “My Son Died for This Damn Plant it Is Urgent That Everyone Knows, Kills a Child in 1 Minute and an Adult in 15!!”) appears identically across multiple websites and provides the following representative claim:

This post does not seek to debunk that specific story, in part because it comes with no details that allow any aspect of it to be verified. Instead, this post addresses more broadly the risk posed to humans by this widespread potted plant.

Dieffenbachia is indeed very common among household plants (it’s simple, and requires little sunlight), and eating its leaves or rubbing your eyes with your hands after coming into contact with the plant may indeed cause irritation, which in turn can cause the swelling described above. As far as the plant causing death, however, Ed Krenzelok, an emeritus professor of pharmacology at the University of Pittsburgh Medical Center and a former director of the Pittsburgh Poison Center who has researched Dieffenbachia toxicity specifically, is skeptical:

Below the actual fake story

We all know that having plants in our homes can be very beneficial as they are very nice looking and green providing us with a relaxing feeling throughout the day. Unfortunately, not all plants are good plants; always have this in mind when you plan to put some pot of plant into your home. In this article we shall present you a tragic story of one person who unfortunately lost his own child because of one plant kept in his home.

Here is his story: “My son died because he put a piece of leaf in his mouth and the tongue swelled leading to suffocation. This plant is quite common in many homes and offices. It is deadly poisonous and dangerous, to the point of killing a child in 1 minute and an adult in 15 minutes. If you touch it by chance you should never bring your fingers to your eyes, as this could cause permanent blindness. Warn your friends and family”.

This man revealed his story publically because he wanted to warn every person who by any chance has owned this plant in its home as it may lead to death.

The name of his son was Esteban who was 5 years old who was playing around the house. However, he started to feel bad and his mother thought it was just indigestion or fatigue. Unfortunately, this wasn’t the case; the child showed a strange color on his skin and had great difficulties with breathing. The parents immediately called 911, and the child was transferred to the hospital where he was admitted as poisoning emergency. No one could tell what was really happening, and after half an hour the doctor brought the terrible news to Esteban’s parents that the child had passed away. The doctor believed that the reason for his death was poisoning from something he had eaten. The parents were in great shock, as they could not figure out what has Esteban eaten that could cause such terrible effect. 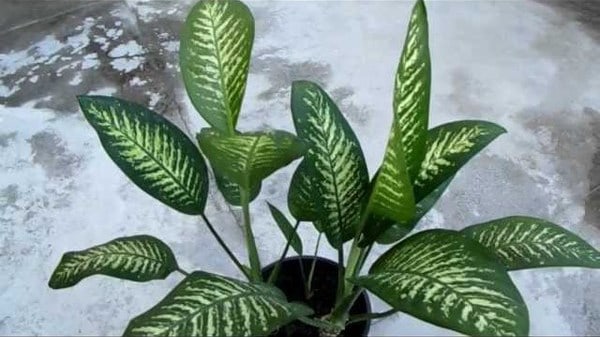 After thorough blood testing, it was revealed that the child had inside his blood stream a large dose of a chemical known as calcium oxalate.

This chemical is found in a plant called Diefenbaker or better known in countries of Latin America as Amoena. This is rather common plant that every house has it since it is endurable and it does not require plenty of sunlight, and because of that it is frequently kept in offices. However, after reading this story you need to be extremely careful provided that you have this plant near you, and especially if children are near it as a result of its high rate of poisoning if it is by any chance consumed.

If by any chance someone suffered a poisoning of Diefenbaker, the National Library of Medicine of the United States advises to clean the mouth with a cold, wet cloth, after that rinse your eyes and drink plenty of milk. This is the first response to poisoning of Diefenbaker; the second one is to immediately consult a care center.

Diefenbaker is a very dangerous plant as it can cause death, and because of that do not forget to share this information with your loved ones and friends or to anyone you know.

Continuing With The Report

Krenzelok told snopes it was not uncommon at his center to see patients, most commonly children, for exposure to Dieffenbachia. In fact, it is the second most common plant exposure treated in American poison control centers, and a majority of those cases involve children. Krenzelok said the Center typically treated these cases by providing the child milk or water  (“It didn’t matter. Basically, just to take the irritation away,” he explained) and by offering assurances to the parents that there would be no long term problems once the pain subsided.

Tags:KILLS A CHILD IN 1 MINUTE AND AN ADULT IN 15!, MY SON DIED FROM THIS DAMN PLANT IT IS URGENT THAT EVERYONE KNOWS