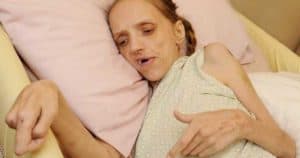 Beverly Pickorer had been a heavy drinker for most of her young adult life, eventually getting to the point where she was drinking, on average, 40 beers each day, as reported by the Sheffield Telegraph. At age 35, the mother of four became quite ill, suffering a tragic end caused by cirrhosis of the liver. She also suffered a loss of teeth, a loss of the inability to speak, and spent years in a care facility unable to do much of anything for herself – all because of chronic alcohol abuse, as reported by Mirror UK.

Pickorer’s devoted partner, Anthony Howard, stayed by Pickorer’s side at every step, watching her health deteriorate for five and a half years before her condition reached the point in the pictures below, according to Mirror UK. Howard released the photos of his beloved partner, whom he said began drinking heavily in her early 20’s as a result of several troubled relationships. He hoped that in sharing the photos of Pickorer, he could help alert others to the very serious and potentially fatal outcomes of prolonged alcohol abuse.

According to the National Institute of Alcohol Abuse and Alcoholism, cirrhosis is only one of four diseases that may plague the liver as a result of prolonged alcohol abuse, the others being steatosis (fatty liver), alcoholic hepatitis, and fibrosis. Alcohol also causes many other parts of the body to weaken or fail over periods of prolonged use. The pancreas produces toxic substances as a result of alcohol consumption, and this can lead to pancreatitis, a dangerous inflammation of blood vessels within the pancreas that can reduce the body’s digestive capabilities. Drinking can also affect the body’s immune system; heavy one-time consumption can affect the body’s ability to stave off infection for up to 24 hours afterward while heavily  drinking over time can make a person far more susceptible to diseases like pneumonia.

It’s important to note, however, that severe problematic drinking has been entered into the Diagnostic and Statistical Manual of Mental Disorders, DSM-5, meaning that alcohol abuse is considered a psychological disorder, ranked in the DSM amongst disorders like depression and ADHD. While alcoholism has long carried the societal stigma of being a choice by reckless, careless individuals, it is now being viewed in a different light, with many psychologists turning the perception of addiction around and classifying it as a type of mental disorder.
According to the NIAAA, alcohol use disorder (AUD) is a clinical medical condition that can be diagnosed, and approximately 17 million adults in the United States suffered from AUD in 2012 alone. AUD is diagnosed on a sliding scale – mild, moderate, sever – and is based on how many of the 11 criteria for the disorder are met by an individual in a 12-month span. Those 11 criteria are listed below:

“-Had times when you ended up drinking more, or longer than you intended?

-More than once wanted to cut down or stop drinking, or tried to, but couldn’t?

-Spent a lot of time drinking? Or being sick or getting over the aftereffects?

-Experienced craving — a strong need, or urge, to drink?

-Found that drinking — or being sick from drinking — often interfered with taking care of your home or family? Or caused job troubles? Or school problems?

-Continued to drink even though it was causing trouble with your family or friends?

-Given up or cut back on activities that were important or interesting to you, or gave you pleasure, in order to drink?

-More than once gotten into situations while or after drinking that increased your chances of getting hurt (such as driving, swimming, using machinery, walking in a dangerous area, or having unsafe sex)?

-Continued to drink even though it was making you feel depressed or anxious or adding to another health problem? Or after having had a memory blackout?

-Had to drink much more than you once did to get the effect you want? Or found that your usual number of drinks had much less effect than before?

-Found that when the effects of alcohol were wearing off, you had withdrawal symptoms, such as trouble sleeping, shakiness, irritability, anxiety, depression, restlessness, nausea, or sweating? Or sensed things that were not there?”

If you or a loved one fits two or more of these criteria, it may be cause for concern, but you should never use this information as a substitute for speaking with a licensed health professional.

Pickorer’s story is a harsh reminder that the traumas of life can sometimes lead individuals down self-destructive paths, but treatment and recovery are still possible if the problem is addressed soon enough. The crippling stigma surrounding alcohol abuse can oftentimes keep suffers from seeking the help they need for fear of the judgment they will receive. Changing the perception surrounding AUD and spreading awareness of the signs, symptoms, and outcomes can help reduce the huge number of people struggling with AUD.

d been a heavy drinker for most of her young adult life, eventually getting to the point where she was drinking, on average, 40 beers each day, as reported by the Sheffield Telegraph. At age 35, the mother of four became quite ill, suffering a tragic end caused by cirrhosis of the liver. She also suffered a loss of teeth, a loss of the inability to speak, and spent years in a care facility unable to do much of anything for herself