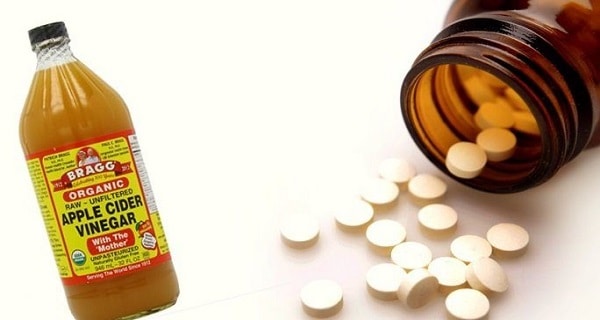 For many years, apple cider vinegar has been used for treating different health conditions.

Even though it has many beneficial properties, when combined with certain medications, apple cider vinegar can cause serious side effects and lead to some health issues.

Apple cider vinegar is usually used for weight loss. It empties the stomach and makes you feel satiated for a longer period of time, which in turn reduces your appetite.

A Chinese study showed that apple cider vinegar can reduce the risk of esophageal cancer by 37%.

Apple cider vinegar can be very beneficial for diabetics. It has anti-glycemic properties and can prevent the digestion of starches which cause the blood sugar levels to increase.

Don’t Use Apple Cider Vinegar If You Use Any of These Medications!

Taking apple cider vinegar interacts with certain medications can lower the potassium levels in the organism.

If you are taking any of these medications, you should not combine them with apple cider vinegar.

This medication is used for treating heart diseases. Combined with this medication, apple cider vinegar can obstruct the absorption of potassium in the organism, thus increasing the risk of side effects such as mood swings, vomiting, vision problems, dizziness, and diarrhea.

These medications are usually used in the treatment of bloating since they stimulate the body to remove the accumulated liquids.

Potassium can maintain the balance of water in the body. As we said before, apple cider vinegar lowers the levels of potassium, which will result in dehydration.

Insulin is a medication used to balance the blood sugar levels in the body and it is usually used by diabetics.

Be very careful while using apple cider vinegar. The long term use of ACV can cause low potassium levels in the body, thus leading to other health problems. For instance, consuming 8 oz. of ACV a day for a few years can cause osteoporosis!

Other Groups of People Who Should Not Use Apple Cider Vinegar

Pregnant women are recommended to avoid taking ACV since there are not enough evidence how ACV affects the body and the fetus during pregnancy.

Breastfeeding mothers should also avoid apple cider vinegar because it can have a negative effect on the newborns.

Postmenstrual women are more likely to have reduced bones density. As we said before, apple cider vinegar lowers the potassium levels in the body. This means that the high amounts of ACV can lead to osteoporosis.