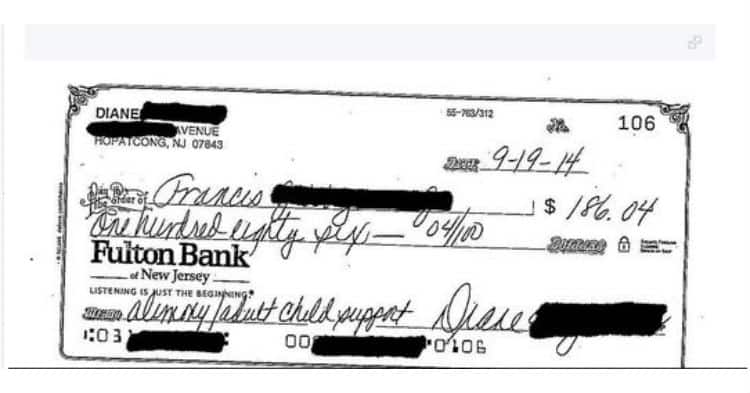 sue others for anything and everything, when it seems like it would be a whole lot easier to go out and get a job of their own.

The most recent of “oddball charges,” comes from a divorced New Jersey couple. The woman is being sued by her ex-husband for writing certain memos on the weekly alimony checks that she writes him.

The plaintiff is Francis J. Wagner Jr. and he is reporting that his ex-wife is exacerbating his physical and emotional health because of the notes that she writes on the alimony checks that she sends him every week.

As far as I’m concerned I can write anything I want on the memo line because it’s a note to myself,” ex-wife, Diane Wagner said.“I was the victim in that marriage. What more blood does he want from me? I pay him religiously.”

Diane, who allegedly was the victim of her ex-husband’s drunken episodes for their ten years of marriage, has had enough of his immaturity. In addition to the weekly checks for $186 that he receives from Diane, Wagner also collects Social Security/Disability. Diane couldn’t afford a divorce trial so she agreed to give him $744 a month in spousal support for six years, as long as he agreed that their marriage was over. On top of all of this, Diane is currently receiving treatment for cancer and while she can barely afford the spousal support checks, her request for a reduction was denied.
The law firm that is fighting on behalf of Francis, Trautmann & Trautmann, shared this very embarrassing post on their Facebook page, while she was regularly sending her ex alimony payments…
“Alimony for the man!” the caption read, next to a photo of one of Diane’s redacted checks. “What’s funny is that the now ex-wife so hated paying our client — the husband — $800 per month for the next six years as alimony and she had written Alimony/Adult Child Support in the memo of the weekly checks — until we put a stop to that harassment.”
Seems more like Diane is the one enduring mental distress in this situation.

“When I found out my personal business was on the Facebook page, that caused me distress,” she said.

According to Diane, this post was dated on March 11, 2015, and she didn’t even receive notice from the law firm until July.

“Please be advised that your writings are causing my client severe emotional distress and have led to him having sustained heart attacks in recent weeks.”

This letter didn’t stop Diane from her freedom of speech though, and since then she has been writing the acronym, FOAD on the checks. Evidently, it means…”F off and die.”

The majority of commenters sided with Diane…

“He is just a lazy ass that doesn’t want to work n then wants to sue now so he can take whatever she has left! He is worse than an ass, his ex is suffering from cancer n the only thing on his empty mind is how to get more money to make sure his lazy ass don’t have to go to work. I would hope when this goes back to court that the judge does the right thing n drops all this n tells him to get a job as there will be no more money coming his way for his big boy child support.”