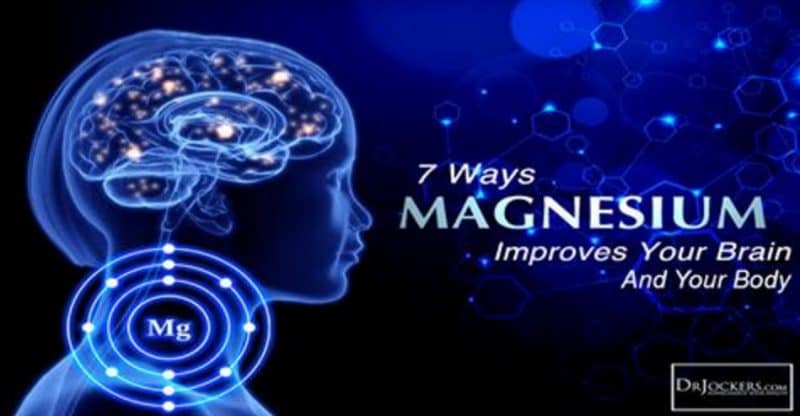 Magnesium is crucial for our overall health, as this mineral is present in all body cells and has a role in more than 300 enzymatic processes. Moreover, magnesium is needed for normal blood sugar regulation, maintaining normal bone density, normal pulmonary function, and normal cardiac rhythmicity.

Yet, the deficiency of this mineral is very common and leads to numerous health issues people suffer from on a daily basis. Since it does not show up in blood tests, as only 1% of magnesium is stored in the blood, doctors often misdiagnose these deficiencies.

According to Dr. Norman Shealy’s, M.D., Ph.D. is an American neurosurgeon and a pioneer in pain medicine “Every known illness is associated with a magnesium deficiency,” so “magnesium is the most critical mineral required for electrical stability of every cell in the body.  A magnesium deficiency may be responsible for more diseases than any other nutrient. ”

Researchers have found that 68% of the Americans do not get the daily recommended amount of dietary magnesium and 19% do not even get half of the RDA levels (310-420mg daily).   Additionally, it is believed that this RDA level is far too low, so if we consider the adequate levels of magnesium that a person should consume, it turns out that about 80% of Americans are consuming insufficient quantities of it.

Apparently, our diet is high in calcium but low in magnesium, which can be a serious issue.

This elevated calcium to magnesium ratio might be the main culprit for issues like migraines, autism, asthma, allergies, mitral valve prolapse, attention deficit disorder, fibromyalgia, and anxiety.  When there are high levels of calcium but low levels of magnesium in the cells, the person suffers from twitches, spasms, muscle contractions, and even convulsions.

Yet, when the body lacks magnesium, it cannot produce and use protein and enzymes properly, detoxify, and use antioxidants.

This mineral is critical for the detoxification of the body, and since our environment is full of toxins, our bodies need more of it in order to function properly. Also, our diets are low in nutrients, the soil is high in herbicide and pesticide residue, so we end up being deficient in it.

These are the health benefits of magnesium:

Magnesium plays a role in more than 300 enzymatic processes in the body which are vital for the function of the organs and tissues. It enhances the intricate brain functions and thus boosts cognitive health.

This mineral is linked to memory potential, and scientists have confirmed that the reduced magnesium levels in the brain are related to poor memory function.

Namely, the hippocampus region of the brain is the primary location for retaining long term memories, and magnesium strengthens the function of its synapses.

Also, magnesium strengthens the synaptic nerve endings in the prefrontal cortex area of the brain, which retrieves short-term memories.

Studies have found that the plaque buildup is evident in linked to the declining cognitive abilities symptomatic of the pathogenesis of Alzheimer’s disease.

Moreover, research has shown that by optimizing the levels of magnesium in the brain, one can prevent the further decline of cognitive function.

It has been found that the supplemental treatment of magnesium for 17 months reduced amyloid plaque accumulation in the hippocampus region of the brain by 35.8% and by 36% in the prefrontal cortex.

Magnesium boosts the ability to learn by repeatedly stimulating the nerve and the ability for nerves to transmit signals more effectively. One study analyzed the effects of Magnesium threonate (MgT) supplementation in rats in terms of their ability to swim and find a submerged platform on which to rest and found that those who were using it were dramatically faster than the control group.

Researchers actually found that the supplemented group retained their memory of the place where the submerged platform was hidden after 24 hours, while the rats from the control group forgot and searched it twice longer through the maze.

The effects of the supplementation were a spatial long-term memory enhancement of 122% in younger rats and 100% improvement in older rats.

Magnesium helps the elimination of acids, toxins, gasses, poisons and other impurities from the body, which deplete the essential nutrients, needed for our optimal health.

Magnesium is the main ingredient in most laxatives used to relieve constipation as it improves the motility of the gastrointestinal tract and colon and stimulates the elimination of contaminants.

Magnesium is also known as anti-stress mineral since the cellular magnesium levels stimulate serotonin production which in turn improves mood. Clinical studies have shown that 125-300 mg of supplemental magnesium treats the symptoms of depression within a week.

On the other hand, you might be magnesium deficient as well if you are often highly reactive towards situations or people for minimal or no evident reason.

Therefore, by optimizing its levels, you can effectively relax the nerves, soothe muscle tension, treat anxiety, and conduct healthy nerve responses, and thus prevent factors conducive to stimulating fear and anxiety and lower the risks of excitability and agitation.

Magnesium is involved in the regulation and maintenance of blood glucose levels, so its deficiency impairs the secretion of insulin and the ability of glucose to be transported into cells.

Scientists have found that supplementing the diet with magnesium through food or oral supplementation improves the secretion of insulin and response in type-2 diabetic patients.

Moreover, the magnesium supplementation is directly linked to the healthy balance of blood sugar, and a reduced risk of developing diabetes.

A study which supplemented participants with 1,000 mg/day of magnesium oxide for a month found an improved glycemic control.

In a combination with calcium and potassium, magnesium regulates the function of muscle contraction and heart rhythm. Also, magnesium helps the regulation of nerve impulses and the maintaining of cardiovascular health.

This mineral effectively lowers blood pressure as well, by relieving the restriction around blood vessels and regulating a healthy contraction of the heart.

The risk of cardiovascular diseases and heart attacks is lowered by the daily intake of 250mg of magnesium supplementation, and the lower doses lower the risk of stroke by.

60% of magnesium is concentrated in the bones, while the rest is present in the blood and soft tissue. If its levels are reduced, the body searchers it, and the cells need to pull the magnesium from the bone formations.

However, magnesium is not the only mineral needed for strong bones, since it also needs to be in a healthy balance with calcium. When it is pulled from the bones, the calcium levels become higher, and this causes calcification of bones and joints, and conditions like osteoarthritis.

According to the findings of limited clinical trials, the daily intake of magnesium citrate over long periods may prevent and reverse osteoporosis. Additionally, women who supplemented their diets with magnesium-rich foods for 2 years reportedly had fewer fractures and a reduced rate of bone loss.

Our overall health is significantly determined by the amounts of healthy sleep we get daily. Magnesium can effectively treat insomnia and provide a deep, night’s sleep.  Namely, the balance of hormones such as melatonin which induces sleep, and reduces cortisol levels, depends on the healthy magnesium balance in the body. This mineral relaxes the muscles and promotes a healthy sleep during the night.

Individuals who are at an elevated risk of magnesium deficiency should take measures to correct them in order to prevent numerous health issues. These include:

Magnesium is a naturally present mineral, so you can optimize its levels by consuming foods that are rich in it. The recommended daily intake of this mineral for adults ranges from 310-420 mg. Always choose non-GMO farmed and organic foods, to enjoy all their health benefits.

Most magnesium supplements are best absorbed by the gastrointestinal tract and limited quantities can cross the blood- brain barrier, as the body filters out 90% of it before it enters the cells.

Recently, it has been found that magnesium L-threonate is the best form of magnesium compound, as it is highly bioavailable and easily passes the blood brain barrier and gets absorbed into cells.

On the other hand, magnesium mineral sprays can temporarily relieve pain as they are directly absorbed through the skin. Over long term periods, they can completely treat pain, and are highly helpful in the treatment of osteoarthritis, as they improve the magnesium balance in the painful areas. You should spray the areas after showering or before going to bed.

However, note that magnesium can interact with certain medications, so consult your doctor before taking any magnesium supplements.

These cases are rare, but there are some risk factors linked to magnesium intake exceeding 5,000 mg/day, and the most common symptoms include:

Therefore, whenever you feel drained and tired, in a bad mood, and you need to rest and refuel, do not turn to caffeine immediately, which additionally burns more magnesium. You should optimize its levels in the body instead and replenish the cells, in order to restore your health and well-being.