A woman lost her husband and two children in a terrible car accident, but she feels she’s getting no justice. The person who caused the crash was engaging in illegal activities. He is an illegal alien, he was driving without a license, and he had been imprisoned and deported before. His actions led to the death of a man and two children, but he’ll only be sentenced to two years in prison.

Courtney Hacking of Texas suffered a devastating loss when an illegal immigrant crashed into a car being driven by her husband, Peter Hacking. In the car with Mr. Hacking were the couple’s children, 4-year-old Ellie Bryant and 22-month-old Grayson. The father and two children were killed in the crash. 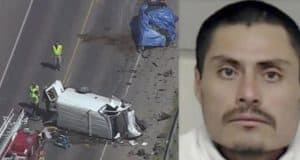 The person who caused the crash was Margarito Quintero Rosales. Mr. Rosales is in the country illegally. He’s illegally employed, and was illegally driving home from his job that day without a license. He fell asleep behind the wheel, drifted over the median, and collided head-on with Mr. Hacking’s vehicle.

This is not the first time Rosales has been in trouble for breaking the law. He had come to the U.S. illegally a few years ago and was arrested and charged with burglary in Missouri. He fled the country, but came back. He’s known for sneaking into the country using various aliases.

Rosales was convicted of criminally negligent homicide. Despite the enormous damage caused by Rosales