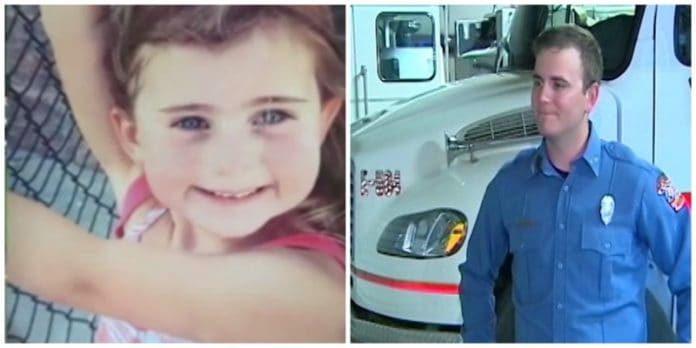 Although we rarely think about it, cars are super dangerous. You are far more likely to get into a car accident than any other accident like a boat, plane or even a train. And you are risking your life every time you step into a vehicle and drive onto the road. And this family just now figured that out in one of the worst ways possible.

The Sinclair family was on their way home from a little trip, when out of nowhere, a car came barreling over the median and hit their vehicle head on. And inside the Sinclair vehicle was Barney Sinclair and his three young children.

Myself and my three children, we were all injured. Charley was hurt the worse,” said Sinclair.

But suddenly, their luck quickly began change. And one car ended up pulling over, and began to help everyone there. And that person? Firefighter Jacob Graves.

Graves, a Spencer, Oklahoma firefighter was driving alone with his fiancee when he got out to help. He began helping all of them, until he realized that there was one person that really needed help. And that was Charley.

“When I initially saw her in the vehicle, I assumed she was dead,” said Graves. Her 5 year old body was lifeless, and her face was a blueish color. He didn’t know what to do.

But she wasn’t. She was close, but not dead. And Graves quickly began to take action. He couldn’t let anyone in the car die at this point. He just couldn’t. He had to do something to help her. He paused his wedding for this. And it was not going to be for nothing.

Yes that’s right. Graves and his fiancee were on their way to their wedding in Sulphur to get married. They delayed EVERYTHING to stop and help this family. And no one was going to die on Grave’s watch.

And that’s when Graves figured something out. After carefully examining the girl, he was able to tell she was in fact alive, but the little girl had brain damage. He didn’t even care about the quality of life she would have after the accident. He knew that if she made it through this, she would be just fine.

The little girl, Charley, was then taken to the hospital, where they diagnosed her with a severe brain injury. But the good news? She would live, just not the way she used to before.

Little Charley couldn’t walk or talk after the accident. Her injury prevented her to do so. It would take quite some time to heal, if it did at all. But she was still alive and breathing, and that was all her family cared about. And the fact that a total stranger saved all of their lives, on his wedding day!

But since this accident has happen, a miracle has occurred, making that TWO miracles since the accident, the first being that Charley is alive.

The now 6 year old is doing something that her family never thought they would see her do again. She is learning to talk and walk again. She is showing stupendous progress, and everyone is in disbelief, including us!

Now, Graves is being honored with the “Firefighter of the Year” award. And the family, and everyone who has heard this story, is so unbelievably grateful for his heroism. He saved the life of this beautiful little girl. And I am just so grateful that he was able to do so!

“We can’t say enough nice things about him and what he’s done for our family,” said Sinclair.

And neither can we! After seeing this family, and just knowing the heartbreak they would have went through if it weren’t for Graves, I just can’t even imagine!

Graves would be a hero no matter what, but the fact that he postponed his wedding events just to be able to save this family, and save this little girl, just shows that he is a TRUE hero. In my opinion, he deserves more than just the “Firefighter of the Year” award.

“He didn’t have to stop and he did” said Barney. And if that doesn’t tell you how thankful they are, then I don’t know what will.

If you are thankful that Graves was there to save this little girls life, SHARE this post with your friends and spread the word of his act of heroism!