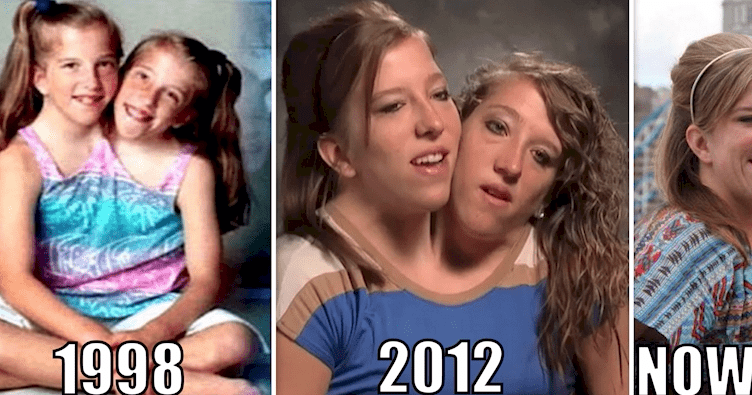 Abby and Brittany Hensel took the world by storm when they appeared on TLC.

Remember these conjoined twins? They were born in year 1990. At first, the doctors had no hope even if they would survive the first day of their life. The parents of Abby and Brittany Hansel immediately rejected the option to perform the operation to separate them, due to the fact that the doctors warned that they wouldn’t survive.

Today they are two beautiful professional women with 28 years of age, with fame and a path walked more impressive than most “normal” beings in the USA. Just keep on reading and discover all about these lovely and unique America’s Sweethearts!

The Beginnings of the Conjoined Twins

Abby and Brittany Hensel are Siamese twins born in a small town in Carver County, Minnesota, on March 7, 1990. Their mother is the nurse Patty Hensel and their father is the carpenter and landscaper Mike Hensel. In addition to their parents, the twins share family life with a younger sister and brother.

The medical origin of their condition was that the fertilized ovule wasn’t divided correctly. In case everything had been normal, they would be identical twins. In contrast, Abby and Brittany Hansel share some organs, and others operate independently. They share almost all the organs from the waist down. Upwards, each one has a greater independence of organs, beginning with their spines. This is how the body of the conjoined twins is composed:

When Siamese siblings are born, an important factor is just a chance. Sometimes, there’s a good independence of organs, so the separation is usually simpler. In the case of Abby and Brittany Hansel, they are bounded and trying a separation process would be very dangerous for them.

There’s a height difference too. Abby of 1.57m is higher than Brittany (1.47m). Because her two legs have different heights, Brittany has to stand on tiptoe to maintain balance.

According to the statistics,  only one in 50K times on twins births happens that the brothers/sisters come united by some part of the body (Siamese). Of these, only 500 times the twins survive the first year. Abby and Britty, as their family calls them, present an even more particular case because they are double-headed conjoined twins. This type of case has only happened 4 times in the history of medicine.

How Is the Daily Life of the Conjoined Twins Abby and Brittany Hensel?

The conjoined twins still have certain levels of independence. Each one has control of an arm and a leg, and also sensitivity on their side of the body. If you tickle the right side, only Abby laughs. Even, their body temperature is different. In the case of medicine, if one of them takes a pill it affects to both equally.

Thanks to this independence, they’ve had to make a huge effort since their birth to learn to coordinate. The activities that require both sides of the body, such as walking or clapping, they had to learn to carry out together. Nowadays they are able to develop normal activities of any girl of their age, such as running, walking and playing volleyball. 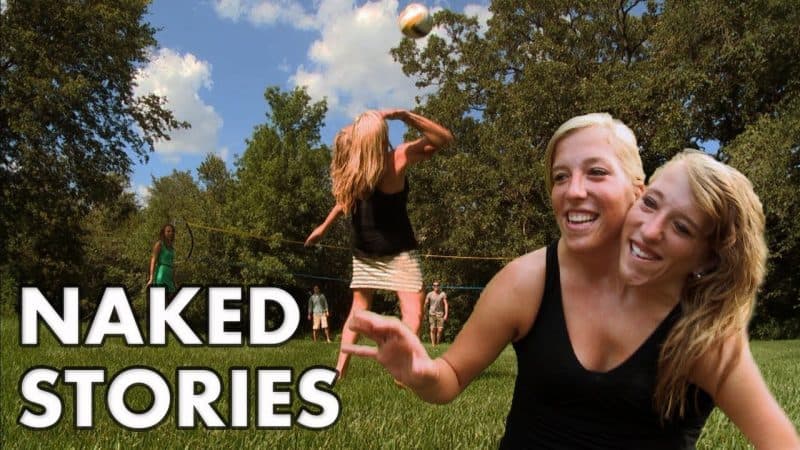 They even drive a nice car, which is also a team effort. The steering wheel is driven by both, and while Abby (who is on the right side) deals with the pedals and the gearbox, Britt takes care of signals and lights. To achieve this, they also had to present two driving exams separately, and each one has their license. 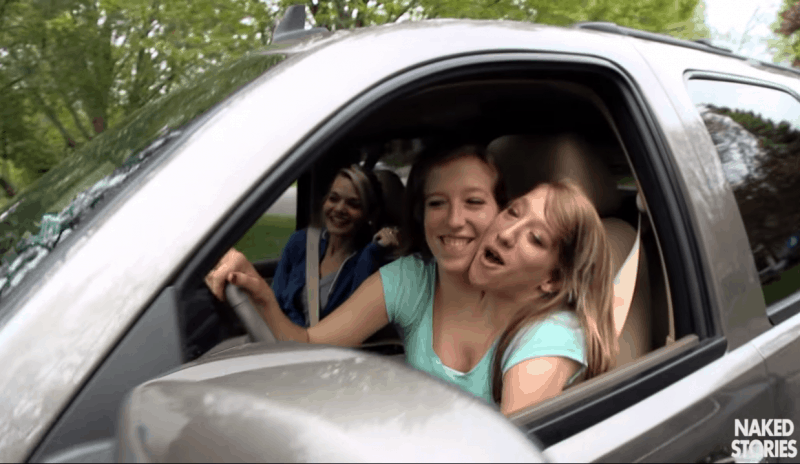 Despite sharing the same body, both have different tastes and preferences in terms of food, clothing, styles and even their personalities. Abby, for example, has an extroverted and jovial character. In contrast, Britt is more the shy and reserved of the conjoined twins. The same way happens with the interests and hobbies: In the case of Abby, she’s passionate about mathematics, but Brit is more inclined towards arts and writing.

They must negotiate for everything: footwear, clothes and where they’ll go. Generally, regarding the dress style Abigail wins, because of her strongest personality, she’s more imposing (nevertheless they have a seamstress, who designs models that highlight each personality separately). At the table, it’s usual that each one has their own food plate to eat, and even when they go to the cinema, despite occupying a single seat each one buys a movie ticket.

Even in the flights by plane, they’ve had to overcome difficulties given their particularity. Each one has a passport, but they occupy a single airplane seat, so they can only buy an air ticket. This has sometimes brought problems to board the plane, especially on international flights.

They don’t mind being Siamese. Throughout their lives, they’ve had to get along and agree on everything, even for the most basic tasks of every human being. However, something that really disturbs them is that people keep staring at them, or take pictures of them secretly. Their close friends always take care of this and try to keep them safe and in low profile. 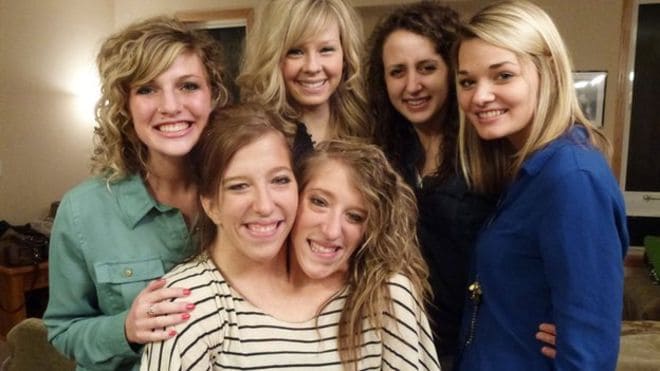 The Jump to Fame

At 6 years Abby and Brittany Hansel were placed under the spotlight and were known by the great American audience when they appeared on the famous Oprah Winfrey show. From this, their fame was on rising, achieving even to appear on the cover of Life Magazine.

Another big step on the road to the fame of Abby and Brittany Hansel was the special program they did with Discovery Channel. This documentary was called “Abby and Brittany” and was made in reality show format. In the program, they showed the avatars of the daily life of these conjoined twins after graduation.

But without a doubt, their true step to the fame happened when they released their own special show “Joined for Life”. It was with that program that the American public really fell in love with the fantastic Abby and Brittany Hansel. The success of Joined for Life eventually led to their own short series, simply titled Abby & Brittany, produced by TLC network.

Their Professional Life and Career

The conjoined twins Abby and Brittany took a normal school life from a young age. Their teachers and tutors made sure that they were not victims of discrimination or bullying, so they successfully completed their school, graduating from High School in 2008. When girls each one had their own aspirations. As teenagers, they both decided on teaching. They enrolled in the University of Bethel, in Arden Hills, Minnesota. By having different interests, they tried to get 2 majors taking extra courses, but they were not able to. Finally, they obtained a Bachelor of Arts, majoring in education, with a specialty in mathematics in the year 2012.

Currently, they perform their professional career successfully, teaching. Their first experience is with a fifth-grade classroom in a public school district just an hour from their hometown. In addition to the knowledge, conjoined twins Abby and Brittany have the opportunity to teach their students what it’s to overcome the obstacles of life.

In this regard, Abby says in an interview for BBC World “Obviously we understand that we are going to receive one salary because we are doing a single person’s work (…) As we acquire more experience we would like to negotiate a little more, taking into account that we have two titles and that we can offer two different perspectives or teach in two different ways.” 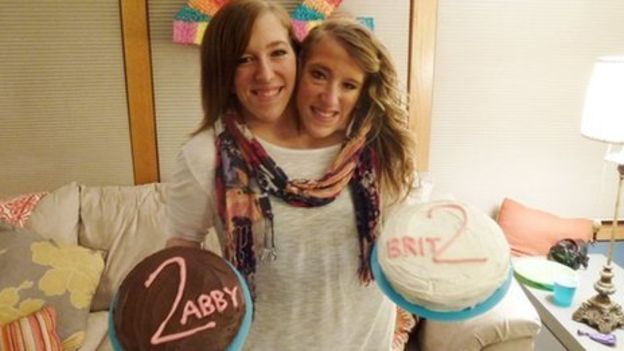 Also for BBC World Britt says “One can be teaching and the other supervising and answering questions (…) So in that aspect, we can do more than just one person.” One of her best friends, Cari Jo Honcke also supports them in this regard “They are two different girls, but capable of working together.”

The Health of Abby and Brittany Hansel Today

Even though there is some concern about this issue, both from family members and from doctors, until now they’re in good shape. Only 4 pairs of united twins that share the undivided torso and two legs have been able to reach adulthood. Most of these individuals have congenital problems, such as heart conditions. To date, it hasn’t been the case of the famous conjoined twins. For the moment, they develop life as normally as possible, doing daily activities and even swimming, cycling or jogging normally.

Regarding the future, in the specials for Discovery Channel in 2006 when they were just 16 years old, both said they expected to go out normally, and someday get married and have children. Recently the radio station “XM” opened a great debate in the media and social networks, by spreading the rumor that one of them was already committed (Abby)

.However, until now no further details are known about it, and Abby and Brittany Hansel haven’t denied nor confirmed the version. They maintain their firmness in being discreet in their private lives. However, this novel has generated millions of comments in the media and social networks, unfortunately, many of them in bad taste.

And… What About Sex?

This is the million dollar question, which a lot of their followers and fans would like to know the answer. Is a question that everybody wants to know, but nobody dares to ask. The truth is that little is known about the most intimate part of the life of Abby and Brittany Hansel since they decide what to share and what not, through the media and their reality shows. The rest is kept it in absolute discretion.

In 2012 the conjoined twin expert Alice Dreger broke it down for The Atlantic. In a single idea, she stated that we don’t really know much about the sexual lives of the conjoined twins, and one’s view on the topic really depends on that person’s view of sex in general. This was what he said:

Based on what we know about the significant variability of one conjoined twin to feel a body part (e.g., an arm) that putatively ‘belongs’ to the other twin, it’s hard to guess how any conjoinment will turn out in practice. Nerves, muscles, hormones, and psychology all probably factor into who feels what … Whether or not both are ‘having sex’ with the third person in the equation depends on how you think about ‘having sex’ … From my studies, I would postulate that conjoined twins probably end up having less sex than average people, and that is not only because sex partners are harder to find when you’re conjoined. Conjoined twins simply may not need sex-romance partners as much as the rest of us do. Throughout time and space, they have described their condition as something like being attached to a soul mate. They cannot desperately need a third, just as most of us with a second to whom we are very much do not need a third—even when the sex gets old.

What Do Abby and Brittany Hansel Nowadays?

After passing through their childhood, going through all their celebrity era including all the documentaries, programs and shows, the conjoined twins Abby and Brittany try to live as discreetly as possible. They continue to give their fifth-grade class: while one of them teaches, the other supervises the behavior and answers questions.

For the rest, they still drive their car for almost an hour to go to work, and in their free time they share with their friends, play volleyball, or simply take a good bike ride. We don’t know what the future holds for these particular girls, but they are undoubtedly a great example of overcoming and determination. Abby and Brittany Hansel, born to live together but also born so stand together.