After receiving a call from a concerned neighbor, police in Virginia responded to a Rockbridge County home where they found a 3-year-old girl who a caseworker would later testify was “feral.” Authorities would soon make a second horrid discovery inside the trailer belonging to an incestuous couple, and now, prosecutors are calling it one of the most disturbing cases they have ever encountered. 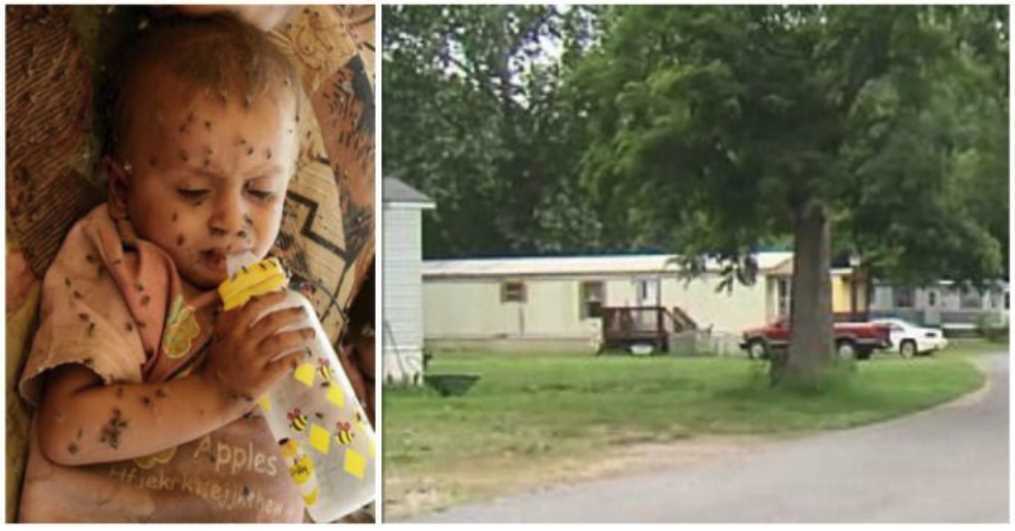 Image for visual representation only (left); a trailer on Jasmine Lane in Rockbridge County where a feral child was found (right).
Robert Eugene Clark, 39, and his half-sister Samantha Kay Simmons, 30, were handed combined sentences of more than 100 years on Wednesday. Clark was found guilty of nine counts of rape, aggravated sexual battery, and taking indecent liberties, and he was sentenced to 65 years in prison. Simmons was convicted of 11 counts of aggravated sexual battery, sodomy, and endangering the welfare of a child, and she was given a prison sentence of 43 years.

Robert Eugene Clark (left), Samantha Kay Simmons (right)
Their horrifying crimes were originally discovered in September of 2015 when one of their neighbors on Jasmine Lane called the police.

The deputy wrote in his report that approaching the residence, he was struck by the stench of urine and observed insects swarming all over the trailer.

When he crossed the threshold and stepped inside the living space, he saw what appeared to be thousands of cockroaches and other bugs on the walls, the ceilings, the floor and all the furniture.

The deputy then saw a 3-year-old girl who, as he later reported, was crying while seated at the kitchen counter, with insects crawling all over her. [Source: Daily Mail]
“There was clothing, papers, trash, feces, and cockroaches everywhere,” Peggy Sigler, a caseworker for the Rockbridge Area Department of Social Services, testified on Tuesday. “You walked in the home and the cockroaches would literally jump on you and crawl all over your body.”

Authorities would soon make a second horrid discovery inside the decrepit trailer: another little girl of 8-years-old, the sister of the toddler, who would ultimately recount the incredibly disturbing details of sexual abuse the girls both suffered at the hands of Clark and Simmons.

Trailer homes on Jasmine Lane, where the girls were found.
The 8-year-old told her foster mother that over the course of four months in 2015, Clark repeatedly raped and sexually abused her and her sister, forced them to perform sexual acts on one another, and whipped them with a belt while they stood naked. She said she would often bleed from the abuse.

The children were removed from the home and placed in foster care. While they are doing much better with a family that plans to adopt them, both girls still show signs of the abuse they endured.

Now 5 years old, the younger of the two victims show signs of developmental disorders that have prevented her from entering kindergarten. She can identify just one color, purple, and has yet to master the most basic of words and numbers, according to testimony.

When she spoke shortly after being removed from the home, it was in gibberish that could only be interpreted by her older sister. The girl was prone to screaming and would stay up at night crying.

Clark, whose lawyer said his client has a mild form of mental retardation, remarked during his Tuesday testimony, “I ain’t denying it, but I don’t remember because I’ve got a short memory,” when pressed on details of the abuse during a cross-examination by Moon. “I’ve hit my head so many times on stuff that I can’t remember half of the stuff I do anymore,” he added.

Clark also said he likes it just fine inside the Rockbridge Regional Jail. “As long as I have a roof over my head, a bed to sleep on, and three meals to eat, I’m happy,” he testified. “I want to get out someday, but the way it looks I won’t be able to get out just yet.”

That now appears to be a vast understatement, as Clark and Simmons will both more than likely die behind bars. While it appears that their children now have a loving home, they may never make a full recovery from the abuse suffered during their formative years. Stories like this remind us that evil does exist in this world and to keep our babies as close as possible.

Please share the story and tell us what you think by clicking one of the buttons below. We want to hear YOUR voice!